Albacore tuna are found throughout the Pacific Ocean and support valuable commercial and recreational fisheries. They are a highly mobile species, undergoing annual migrations which bring them close to the Oregon coast during the summer and early fall before returning to the Central and Western Pacific Ocean.  Albacore are managed as two stocks, the North and South Pacific, separated by the equator. Recent research by the State Fisheries Genomics Lab at Oregon State University identified genetic markers capable of differentiating between North and South Pacific Albacore. This presentation will explain how these genetic markers are now being used in a large-scale study to determine the genetic origin of Albacore caught in the North and South Pacific Oceans providing new insight into how often Albacore migrate cross the equator. 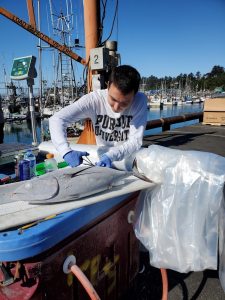 Geoffrey Walker is a graduate student in the State Fisheries Genomics Lab under the supervision of Dr. Kathleen O’Malley. He received a B.S. in Genetics from Purdue University and spent a semester at the University of Canterbury in New Zealand, where he was introduced to marine conservation and fisheries management. His research interests involve using genetic techniques to preserve marine biodiversity and manage sustainable marine fisheries. Outside of the lab, he enjoys hiking, playing video games, and watching college sports.